If you have never read a book by Blake Crouch before then here are two important warnings: 1. Don’t expect a normal thriller because Crouch’s novels usually have a certain touch of science fiction, so if you’re looking for realistic and super believable thrillers then his books probably won’t make you happy. 2. Cancel all appointments before you start reading because once you’ve opened the book and read the first pages you’re probably going to end up in the author’s trap and be hooked for the rest of the novel so that you might forget everything else around you. So don’t let yourself get fooled when Blake Crouch’s newest book „Dark Matter“ starts quite cozily but you better enjoy these few slow pages because they’re the last moments where you’re going to have a normal pulse while reading: in the beginning we’re being introduced to protagonist Jason Dessen, a physics teacher at a local college in Chicago, and his small but lovely family, an attractive and loving wife and a teenage boy, on what seems to be a typical evening like all the other ones before. While his wife Daniela prepares dinner Jason decides to leave the house again for a few minutes to get some ice cream for dessert – not knowing that he’ll never come back to the life he’s used to.

What the hell is going on?

I don’t really want to tell too much about the actual plot because I think it’s best if you go into this book completely blind and preferably don’t even read the blurb before starting it because it already gives away an early twist. All you need to know is that once Jason takes the decision to go out and get ice cream his life is going to change DRASTICALLY and in a very crazy way that most certainly will give you quite a few „What the fuck“ moments because you have no idea how to explain the weird things that happen to the main character – and you’re not alone, because Jason himself doesn’t have a single clue of what’s going on either. Those first chapters after this first big surprise have the potential to be a little bit annoying though, at least if you don’t like it when authors very obviously try to lure their readers by keeping secrets and hiding important information not only from their protagonists but also from their readers. It can be very frustrating when a desperate and shocked Jason asks over and over again if people finally can tell him what’s happening to him and he always gets answers of the „we’re going to tell you soon, but first we need you to do this and that and calm down and do a few tests and tell us what you’ve seen and blabla“ kind. In some way this is a very cheap method to build up suspense because there’s often no real reason to put Jason (and us) on the rack like this – but boy, I’m such an easy prey in situations like that and ALWAYS fall for it. It’s just driving me nuts when unexplainable things happen and everybody seems to know the answers but me and the protagonist and I usually can’t stop reading before someone lets me (us) in on the big secret.

As I’ve mentioned above Crouch’s thrillers usually need to be categorized as science fiction and „Dark Matter“ makes no difference, so don’t be surprised if you stumble over quite a lot of science – and as much as I love mind-blowing scientific experiments I unfortunately couldn’t help getting a bit annoyed by how the author deals with the science part because it didn’t seem very convincing to me. I don’t mind if authors add a lot of fiction to real science and stretch or bend the laws of physics a little bit to explain parts of their story but I just couldn’t help feeling that Crouch’s explanations were sometimes a bit poor. I often had the impression that he just googled some definitions of physical theories and expressions and then used them for his story instead of actually wrapping his head around it and hand this knowledge down to his readers. The author used SO MANY scientific expressions to give his ideas some pseudo-realistic background but his explanations were often quite superficial and while all the characters (of which the majority had some scientific background) seemed to understand them immediately and were like „oh yeah, sure, that’s how it works“ or „brilliant idea, why haven’t I thought of that before“ to me it rather sounded like „bla bla bla *insert fancy scientific words* bla bla bla problem solved“. I can see that Blake Crouch probably kept the science simple to not having to slow down the pace of his story but it made me a little bit sad to think about what a mind-blowing plot this could have become if the author had managed to make his crazy story more believable – and I don’t really complain about the story being too absurd but I just like having feelings like „Oh my god, this could actually happen“ but I never really had them with this book.

What I really liked about „Dark Matter“ besides the insane pace and the secretiveness that completely had me hooked to the book was the „What if…?“ approach of the story because the characters often thought about what could have happened in their lives if they had made a different decision at some point. Could Jason Dessen have become a world-renowned physicist and maybe even have won a nobel prize if he hadn’t impregnated his girlfriend early in his career and decided to make his family his priority? Would he have been happier with all the prestige and the mark that he might have left in the history of science than he was with his wife and his son? Questions like these were a huge aspect of this book and I found it quite interesting to fantasize about alternative lives and stuff like that and didn’t even mind that most of this questions involved Jason’s love interest – which for a change was the wife he was already married to. One could even say that in some way „Dark Matter“ has something of a love story but it was never one that annoyed me since those parts were actually important for the main plot.

Overall I found „Dark Matter“ really exciting and thrilling and it definitely had me on the edge of my seat for most of the time but I couldn’t shake the feeling that this novel could not only have been entertaining but even MIND-BLOWING and I’m a little bit sad that the book didn’t take the last step to reach that level. Blake Crouch’s book is almost insanely addictive at times and I also really liked the story because who can say „no“ to crazy plot twists but there were just a few things that bothered me: the science was too superficial, the main character could have been a bit more relatable (even though I liked Jason) and I also didn’t find the ending very convincing. When it comes to the conclusion I had the impression that the author had reached a point where a perfect solution wasn’t possible anymore so that on the one hand I appreciated that Crouch still took the effort to give his readers some sort of closure but I just couldn’t get myself to overlook the flaws that came with it. 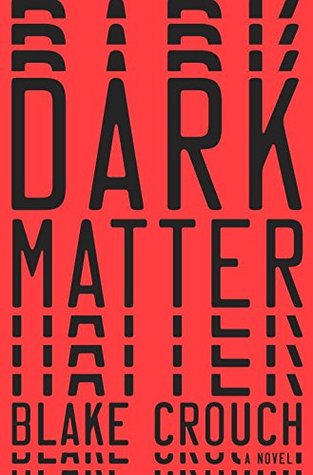 Blake Crouch’s science fiction thriller „Dark Matter“ is addictive as hell and comes with the story that is both fast-paced, original and full of crazy twists and turns but lacks the scientific credibility to make this novel not only highly entertaining but also mind-blowing.