Chance Dalton from Midland, North Carolina, definitely has had better days in his life: he just got beaten up by a bunch of high school bullies who he had anonymously unmasked with his hacking skills for having sexually assaulted several girls and who now seem to have found out who is responsible for losing them their scholarships due to the committed rapes. During the fight they also damaged his precious Plymouth  and all this crap happened to him BEFORE some armed government agents broke into his trailer and caught him in the act of another hack that was supposed to be a revenge for the brawl. But Chance is not the only one with some special computer knowledge who gets into trouble because of his little illegal hobby since he shares his fate with four hackers all over the United States who all suddenly get a surprise visit from a „Mr. Government“ who takes them to a secret government facility where he confronts the delinquents with an offer that they can hardly put down: either they go to jail for their cyber crimes or they change sides and spend the next months working for the state and combine their technical skills to work on a special and top-secret NSA project…

I have been a big Chuck Wendig fan ever since I read his dark urban fantasy novel „Blackbirds“ and have afterwards not only enjoyed the rest of the Miriam Black series but also the first Mookie Pearl book „The Blue Blazes“ and „Atlanta Burns“ and when I first heard about him working on a story about several hackers who have to work for the U.S. government to avoid prison and get forced (I would rather say „allowed“^^) to participate in a secret hacking mission I was super excited and couldn’t wait to get my hands on „Zer0es“ which is also supposed to be the start of another series (when does he find the time to write all these books?). Unfortunately I have to admit that this cyber thriller was the first Wendig book that couldn’t live up to my expectations and actually disappointed me.

Where are the unique and kick-ass characters Chuck Wendig is famous for?

What I usually find so special about Chuck Wendig’s books are the unique characters which are usually some kind of outsiders with rather messed-up lives but who learn to get by – even though they mostly have to learn it the hard way. Whether if it’s Miriam Black who comes from a broken family, is haunted by a supernatural „talent“ that almost ruins her already tough life, Mookie Pearl, an underworld thug who fights not only with a rebellious daughter but also with supernatural creatures in a war for drugs or Atlanta Burns, the red-haired little girl whose childhood has been full of violence and abuse but who rises up to defend other misfits like herself against bullying – they all have not only in common that they’re full of flaws but also that they have a strong character and true grit and are able to survive in a world that has almost completely turned against them. What’s already different in „Zer0es“ is that there’s not only one single protagonist the reader can focus on but a group of four young and one rather not so young hacker who all got into big trouble due to their hacking skills and are now forced by the US government to work together. The story starts with Chuck Wendig going from one character to another and showing the readers a glimpse of their lives before they eventually get arrested. There’s Chance who used his skills to defend girls that have been raped and publicly denounces their tormentors, DeAndre who grew up in the streets of Sausalito where he tried to stay away from gangs in his early life and „earned“ some money with credit card frauds, Aleena from New York City who is an Arab Spring activist, online troll Reagan who likes to give everybody a hard time and old-school hacker Wade who fortified himself on a farm in Colorado. So there’s definitely some variety when it comes to the characters, but there wasn’t a single one of them that was only half as interesting to me as the author’s protagonists from his other books. The only character that was a little bit edgy compared to her rather boring co-hackers was maybe Reagan but to me she disqualified herself quite early with a very sketchy comment about rape victims.

An okay hacker thriller, but not the usual Wendig awesomeness

I was also disappointed by the story which didn’t turn out to be as cool and exciting as I had hoped for. The pace was okay but I found the plot super chaotic and without a lot of structure so that it was often hard for me to find out what exactly was going on – even though there didn’t really happen anything of interest for a long time after they protagonists got arrested and brought to the secret facility. The story got better towards the end and it also picked up some suspense but overall it never really succeeded at keeping me hooked to the book and I was actually glad when I finished the last page. More or less the only thing I really liked about „Zer0es“ was the fact that Wendig apparently did some good research about hacking and computer technology because compared to similar books (like for example James Dashner’s „The Mortality Doctrine“ series where all the hacking stuff was rather poorly and superficially executed) I definitely had the feeling that Chuck Wendig always knew what he was talking about and the cyber missions seemed usually quite realistic. In the end all this made an okay read for me but after having read all these amazing books by Chuck Wendig with all these unique characters it was just disappointing for me that „Zer0es“ was lacking most of the things that made his other books so special to me. 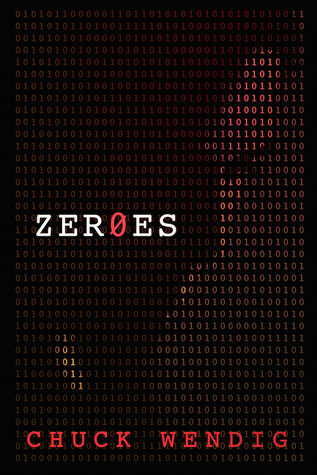 If you're looking for a fast-paced hacker story where the computer stuff is not treated superficially and actually a result of good research then you might enjoy Chuck Wendig's "Zer0es", but if you're basically reading this book because you're hoping for a typical Wendig story with strong and unique characters such as Miriam Black or Atlanta Burns it's not unlikely that you end up finding this SciFi thriller a bit disappointing.