It’s been four years since 16-year old student Katy Frazier went missing in Port Orchard, Washington, and her parents still haven’t given up hope that her beloved daughter is still alive. After all these years they’ve now sought the help of the famous psychic „Pandora“ who runs the TV show „Spirit Hunters“ where she investigates unsolved cases with her self-proclaimed supernatural abilities. While Katy’s father is rather skeptical towards the eccentric and fame-seeking woman his wife sets all her hope in this last effort to finally find closure. Kendall Stark, who works as a detective with the Kitsap County Sheriff’s Department, gets assigned to the cold case as well to assist the psychic and present the department in a good light in the media coverage that Pandora’s involvement brings along, since the now retired detective who was once responsible for the Frazier case was rumored to have messed up the investigation. Not being a believer in the supernatural herself Kendall is quite annoyed by the psychic’s interference and how the department wants her to play along, especially since Brenda Nevins, a notorious serial killer that has already crossed the detective’s path once has just escaped from her prison cell and is now on the loose…

A female serial killer is on the loose

If you’re a regular reader of my blog you should already have noticed by now that I have a thing for serial killer stories and never grow tired of them. Devouring one thriller after another I’ve already „met“ psychopaths of all kinds but one thing that rarely comes along are serial killers that are WOMEN – to be honest there has been only one female serial killer so far that has stuck in my mind and that’s Chelsea Cain’s villain Gretchen Lowell from the same-named thriller series. So that’s why I was very curious about Gregg Olsen’s new thriller „Now That She’s Gone“ because it comes with a similar premise: Female serial killer Brenda Nevins has just seduced a prison director and escaped with her help from jail and is now on the run – which might not exactly appear as the most believable beginning of a crime story but at least it serves it’s purpose since the book quickly picks up some pace and throws its readers right into the story. Quite unfortunately Brenda Nevins isn’t really the central point of „Now That She’s Gone“ because as a detective for the Kitsap County Sheriff’s Department in Port Orchard, Washington, protagonist Kendall Stark isn’t responsible for the hunt for the killer since it’s an FBI investigation – even though she and her colleague, forensic pathologist Birdy Waterman, already have a history with Brenda. Talking about history: „Now That She’s Gone“ is already the second book in the „Waterman and Stark“ series and Brenda Nevins already played a central role in the first book „The Girl in the Woods“ and I definitely recommend that you read this one before you go for the sequel – I didn’t because I didn’t know about the case history and found it often a bit difficult to follow the Brenda plot since Gregg Olsen unfortunately doesn’t offer a lot of help for those who didn’t read the prequel and therefore I often felt a bit left out in the first half of the book.

A missing girl, a serial killer on the run and an annoying psychic that drives everybody crazy

But as I mentioned before Brenda Nevins isn’t the main attraction in this novel because Kendall Stark (and Birdy Waterman, though the forensic pathologist plays quite a minor role compared to her companion) is involved in an old missing persons case that has been reopened by a famous psychic who claims to be able to solve the case in the course of her popular supernatural TV show. I have to admit that it took me a while to orient myself in these two storylines because especially in the case of the missing teenage girl there are quite a few characters involved and it’s not always that easy to keep track of them, also because the author further includes problems from Kendall’s private life in the story since she’s insecure about her marriage because her husband is always away due to his job and leaves her alone with their autistic son. But fortunately I got this sorted out and after having struggled a bit with the first chapters I then really enjoyed the second half of the story. The case is interesting, the pace is good and I also liked Kendall Stark as the protagonist of this novel, especially because she put up a good fight against the very annoying and arrogant psychic who was quite a pain in the ass most of the time. Sadly Birdy Waterman couldn’t match up to her colleague because Olsen doesn’t give her a lot of room to actively participate in the investigation so that „Now That She’s Gone“ feels more like a Kendall Stark mystery than a „Waterman and Stark“ novel.

Although this book didn’t sweep me off my feet with exceeding suspense I really did enjoy reading it though I have to admit that it didn’t succeed in living up to my expectations and that is mostly because I was disappointed by the Brenda Nevins character. I had hoped for a female serial killer that is just as devious and manipulative as Chelsea Cain’s Gretchen Lowell which I found really terrifying but Brenda Nevins seemed a bit like a cheap copy to me. Although she is said to have killed dozens of people including her own family and also leaves quite a bloody trace in „Now That She’s Gone“ I just couldn’t find her very frightening. Instead of manipulating her victims with a sharp mind I always had the impression that she basically just used her fake breasts to lure men and women alike in a trap and this simply didn’t make a very deep character to me. I often had the feeling that she was a bit too vulgar to be really menacing and I had to wait almost until her last appearance to find her as terrifying as I had expected right from the beginning. So if you’re mostly interested in „Now That She’s Gone“ because of the female serial killer then the book might turn out to be a bit disappointing, but if you’re rather looking for a fast-paced thriller that should just keep you entertained for a few hours then you might find Gregg Olsen’s second „Waterman and Stark“ novel to be quite an enjoyable read. 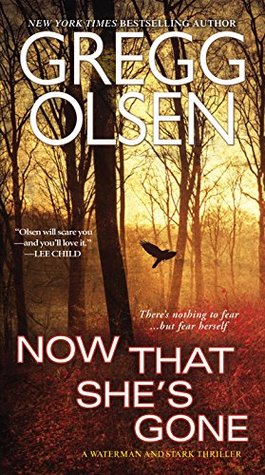 „Now That She’s Gone“ is an entertaining and fast-paced thriller that might not necessarily keep you on the edge of your seat but which comes with still a good amount of suspense and an interesting missing persons case even though the villain in the person of a female serial killer couldn’t live up to my expectations.