If someone had told me a few weeks ago that I would voluntarily read a book about mermaids than I would have laughed in their face because let’s be honest: if you hear the word „mermaid“ you automatically think of creatures that look like the characters in the Disney movie „The Little Mermaid“ – pretty, lovely, charming and friendly. Add a male human beau and you have the typical cliché of a cheesy mermaid story that makes me run away screaming. But when a book about mermaids comes with the title „Ice Massacre“ and a bloody cover I just can’t help getting curious, because a massacre is one of the least things I would associate with those (usually as beautiful depicted) sea creatures and this is the point where Tiana Warner’s YA novel gets interesting because it comes with a much darker premise than you would probably expect.

An exotic island and its annual mermaid massacre

The starting situation of the story is both simple and intriguing: Eriana Kwai is a little island in the Pacific Ocean that suffers from a plague that gets worse with every year. The sea, which used to provide food for the inhabitants, has been occupied by devilish sea creatures that not only kill the fish and thus take away the islander’s main food resource but also attack boats and humans directly and for these reasons pose a deadly threat for the people of Eriana Kwai. The solution for this problem seems to be simple: Kill the creatures that are responsible for the downfall of the island and win the ocean back but this is easier said than done since the enemy has a devious advantage – they’re mermaids. This means they can lure the sailors that have been sent out to kill them with their incredible beauty and hypnotize them which makes them an easy prey. So what can you possibly do when you send out men every year to fight mermaids but they always fail and get slaughtered? You send WOMEN.

The Hunger Games taken to the sea

The setting of „Ice Massacre“ felt to me a bit like a maritime version of „The Hunger Games“. Instead of an annual competition where chosen teenagers from all over the country have to fight each other and are sent to face their own death you here get a slaughter of a similar kind: the strongest and most promising teenagers of the island get chosen every year, run through some kind of academy that teaches them how to kill mermaids without getting killed themselves and then get sent out to sea to get rid of the sea demons plage. One might say that sending out only twenty young adults every year to free the whole ocean from the mermaid plague might not sound like the smartest idea that mankind has ever had but hey, Eriana Kwai is a small island and apparently they can’t afford a bigger army.

As I mentioned above the islanders have now decided to send female warriors in a desperate attempt to win back the sea which means that readers of „Ice Massacre“ get the full girl power since almost all the characters are female – whether on the human or the mermaid side. This is great for everyone who thinks that female kick-ass characters are underrepresented in the young adult fantasy genre but unfortunately the novel comes with a few clichés when it comes to the main characters and also some general stereotypes about girls – like what’s the first thing a bunch of 20 girls does as soon as their ship has left the harbor? They start bitching and jump at each others throats and fight about who’s the coolest girl around that gets to be the captain – urgh. The protagonist Meela who serves as the first-person narrator of the story is some kind of exotic Katniss Everdeen – including her skills with the crossbow and the childhood friend/boyfriend/whatever that has to wait at home while the young warrior fights for her life – but is overall quite likable and easy to sympathize with. If you’re a reader who places value on diversity than you might also appreciate that she’s a P.O.C. but diversity alone shouldn’t be your main motivation to read this book because it’s not really an issue in the story.

Talking about the story: „Ice Massacre“ doesn’t win an award for most original or creative YA novel but it’s action-packed, entertaining and – yay! – bloody. Of course it’s a book that’s addressed at a younger audience in the first place so you shouldn’t expect the Red Wedding kind of brutality but it definitely lived up to the expectations that were evoked by the sensational title and can easily be compared to the violence that for example the Hunger Games series provides. So overall the book wasn’t mind-blowing for me but I got what I had hoped for and really enjoyed this fast-paced and exotic sea adventure that came with surprisingly little romance – but be warned that „Ice Massacre“ is the start of a series (or at least a duology) and won’t answer all the questions in this first book. The war between humans and sea demons doesn’t end with this novel and I’m definitely looking forward to more of it in the sequel „Ice Crypt“. 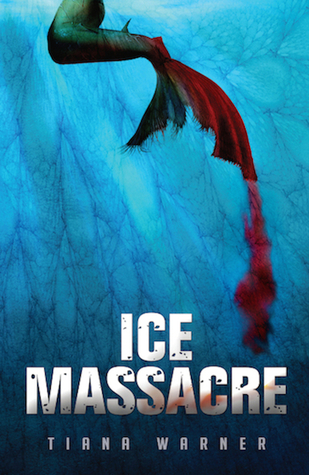 Tiana Warner’s YA novel „Ice Massacre“ comes with an exciting and quite violent twist on the mermaid myth that throws its readers into the middle of a war between some feisty female warriors and devilish sea demons that is not only full of action and girl power but also has a great atmosphere which is provided by the exotic setting – even though the plot lacks the big surprises and some characters are a bit stereotyped.